4 Reasons I am a Raging Bull Right Now 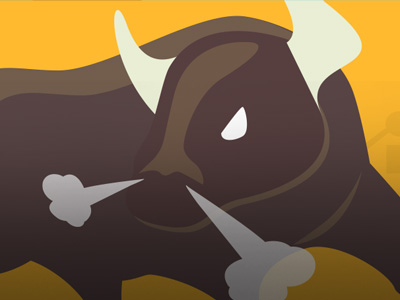 “The world looks just the same, and history ain’t changed … Don’t Get Fooled Again,” bellowed rock singer Robert Daltrey of the The Who on the closing track of their epic 1971 album Who’s Next. Well no truer words have been spoken when analyzing the markets recent October swoon.

As of this writing Sunday, the S&P 500 is now off about 8% since its September 20th peak and of course the naysayers are out in full force obsessing over reasons why the impending death of this big booming bull market is finally in sight.

Now for all intents and purposes, the recent stock selloff is perfectly normal market behavior. In fact, we have already experienced 6 other corrections (defined as a 10% pullback from a recent peak) since the bull market started in 2009. And like clockwork, as each of these market downturns have occurred, many “experts” have been out in droves telling you why the end is near. After nearly 18 years of advising investors on how to allocate their cash, I almost feel like I am in a time loop, where the same cycle repeats over and over again.

The reason it is so hard to stay invested in stocks long term is because bull markets tend to climb a wall of worry. All this simply means is that many financial prognosticators tend to amplify the bad news and downplay the good news as the market inevitably climbs higher. It is almost as if their sole purpose in life is to hinder you from taking advantage of the overly positive returns global markets generously provide investors over longer periods of time.

Therefore, even now, with the economy and corporate earnings so strong, the “financial gurus” have their magnifying glasses out again, enlarging and exaggerating the few potential faults in our current financial landscape, while conveniently ignoring the overwhelming positive economic data staring right back at us. As my partner Bob likes to say, “We have a bull market hiding in plain view.”

So on this recent market downturn, all the naysayers obsess over our trade skirmish with China, rising interest rate fears, weakening corporate profits & of course those pesky midterm elections. Ironically, these four culprits are exactly why I am wildly bullish right now. Shall we break down these four paper tigers?

The trade skirmish between the U.S. & China doesn’t affect our economies in any material way. The Trump administration’s tariffs on goods imported from China total about $60 billion by January, equal to only 0.3% of U.S. GDP.

Contrary to popular belief, interest rates rising really isn’t a surprise, the 10-year Treasury yield has been moving upwards now since the summer of 2016. Furthermore, interest rate increases are the product of an overall healthy economy with gross domestic product at a solid growth rate of 3.5% in the third quarter.

Third-quarter earnings for companies in the S&P 500 are on track to rise 20% for the third quarter, only down slightly from the second quarter’s 25% growth rate. Furthermore, early forecasts point to S&P 500 earnings rising 10% next year. Invariably the market only cares that profits are getting better or worse and clearly they are improving.

Lastly, midterm elections are only a week away and their effect on the equity markets will be discussed with exaggerated importance. Odds heavily favor a Democratic House, which could mean more political gridlock, an actual positive for the markets. A blue house, red senate would mean less major policy changes, creating more certainty, less surprises and the market loves certainty. Furthermore, the S&P 500 hasn’t declined in the year after midterm elections since the 1946 cycle and has climbed 15% on average.

With the market trading 8% below the recent highs, there is no reason it can’t move lower, after all, on average, the S&P 500 loses 13% in a normal market correction. However, just like the last 6 corrections we have experienced in this decade long bull market, the economy is still growing stronger and corporate profits are still persisting higher. So like The Who song says, “The world looks just the same, and history ain’t changed.” It is advisable to ignore the critics, stay invested and Don’t Get Fooled Again.